I needed 50g of coconut oil to make the coconut cake, from James Martin’s Sweet.  I almost changed my mind about baking it as I stood in Holland and Barrett, open-mouthed, eyebrows raised at the price (£8.99 for 300ml of the cheapest brand).  I got some from Marks and Spencer in the end.  Still pretty expensive, but not quite £8.99.

To make the cake, I heated my coconut oil with coconut cream.  Once everything was liquid – coconut oil starts out solid – I turned off the heat and left it to cool. Then turned to my iPod.  I’ve decided to listen to it from start to finish of the stuff on it that’s not a soundtrack of a Hollywood musical, classical, a dramatisation of detective fiction, or teach yourself Spanish.  The soundtrack for the coconut cake was Katie Melua Call off the Search which, Amazon kindly tells me, I bought in 2004.  Not very trendy I know, even in 2004, but I have to say, the scent of warm coconut, a sunny day, the promise of cake and, The Closest Thing to Crazy. Heaven.

I beat softened butter and caster sugar together in the KitchenAid until it was very light and very fluffy (I wasn’t going to make the mistake I made with the Fraisier and not get enough air into my mixture).  I added eggs, one at a time, and then vanilla extract.  Then I folded in plain flour and baking powder, added desiccated coconut and my coconut oil and cream mixture and divided it between two tins (liberally coated with Cake-Release because I’d forgotten to get any baking paper).

The tins went into the oven at 160º fan.  The recipe gives a cooking time of between 20-25 minutes or until a skewer inserted into the middle of the cake comes out clean.  My skewer was clean at 25 minutes.   I left the cakes to cool in the tins for a few minutes then said my usual prayer to the God-of-getting-things-out-of-tins-in-one-piece before turning them out onto a wire rack.

I turned my attention to coconut buttercream.  The iPod had moved onto the soundtrack from Chicago.  I know it’s a musical soundtrack – not on my list of things to listen to in my start-to-finish iPod marathon, but I bought my copy a long time before the film. Amazon couldn’t tell me exactly when.  Perhaps I bought it from an actual shop.

To make the buttercream, I put some butter into the microwave to soften up a bit, getting there in the style of a Bob Fosse dance routine (obviously).  The butter ended up a bit too soft because I overdid the jazz hands and didn’t get it out in time.  It didn’t do any harm though.  I beat it with icing sugar and coconut cream in the KitchenAid, and the buttercream turned out fine.

To put the cake together, James Martin pipes swirls of the buttercream onto one of the cakes, scatters coconut shaving over the top, sandwiches the two cakes together and pipes peaks of the buttercream over the top.  He decorates it with more coconut shavings and sprigs of lemon verbena.  Was it really worth piping the buttercream that’s going to sandwich the cake together?  I didn’t really think so, but I thought I may as well give it a go.  I haven’t bought any disposable piping bags yet, but I do have this.

It may not officially be called an icing syringe, but that’s how it works.  It’s not quite as messy as a piping bag, but it doesn’t hold very much.  Anyway,  I filled it with the buttercream and piped swirls onto the first layer of the cake.  Then, because I was worried that I wouldn’t have enough for the top, I used a knife to spread it out.  I didn’t put any coconut shavings onto the cake because James Martin says that dried coconut tends to dry out the buttercream.  There was no way I was going to use fresh coconut – I tried breaking one a few weeks ago and it took me hours . I left the coconut shavings out.

In Sweet, the picture of the coconut cake looks very stylish, with the elegant peaks of coconut buttercream adorning the top.  Here’s mine.

Not so stylish I’m afraid (although I did take a photo that sneakily hid the missing topping.

As you can see, I didn’t really get the hang of piping elegant peaks, and I ran out of buttercream.  Out came the knife again, and I spread the buttercream over the top.  I honestly do not know why I bother with piping bags at all.

Here’s the final cake – there were no sprigs of lemon verbena in Leamington Spa, so I also had to do without those. 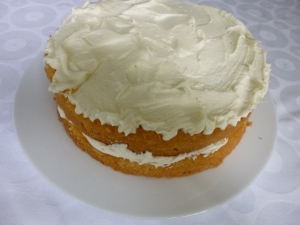 Was it worth it

This was a really good cake though.  The sponge was really light, and the coconut flavour just lovely.

“I’ll miss this cake when it’s gone,” said my husband.  Truly the sign of a great cake.